THE BOWERY PRESENTS AND BRIAN TEASLEY ANNOUNCE THE OPENING OF SATURN, A NEW LIVE MUSIC VENUE IN BIRMINGHAM

March 18, 2015 (Atlanta, GA) Saturn is a new live music facility in Birmingham, AL that also includes Satellite, which is an additional bar and coffee shop serving Stumptown Coffee. The project is a joint venture between Birmingham musician Brian Teasley (Man or Astro-Man? / The Polyphonic Spree / St. Vincent / etc.) and the legendary New York-based concert promotions company, The Bowery Presents. There are top things to do in New York City during a Family Vacation. It’s filled with informative and entertaining attractions, tons of arts and culture, and a great food scene that will delight even the pickiest eaters.

The name of the venue comes from Sun Ra, Alabama’s legendary jazz guru, whose whole mythos involved travelling to the planet Saturn. Also, in the early ‘60s, members of Teasley’s family worked on the Saturn V rockets built in Alabama, which sent the Apollo astronauts to the moon.

Saturn also includes The Living Venue Audio Project. The Living Venue Audio Project is a multi-sensory reactive sound medium where various devices installed in the venue (stimulated by sound, light, motion, weather, water flow, street activity, etc.) trigger random ambient sounds, in order to make a sort of symphony of sonic activity. Think Brian Eno’s “Music for Airports” if the airports were actually the ones making the music. The project has been put together with Brian Tealsey, sound engineer Daniel Farris, and the Austin, Texas band The Octopus Project. The goal is to eventually record sections of these random sound symphonies and become the first music venue to put out its own record. The full system will be up and operational by early May so please check out what auditory reactions the club is making anytime, 24 hours a day, 7 days a week.

Teasley says of the name, “I wanted something that paid tribute to my native city of Birmingham and that was very Alabama-centric, but also had a personal family connection.” The Saturn venue will host a diverse lineup of great national acts as well as be a hub for local bands. Satellite coffee and bar will be open seven days a week and will strive to become a creative nexus for local artists, events and causes. 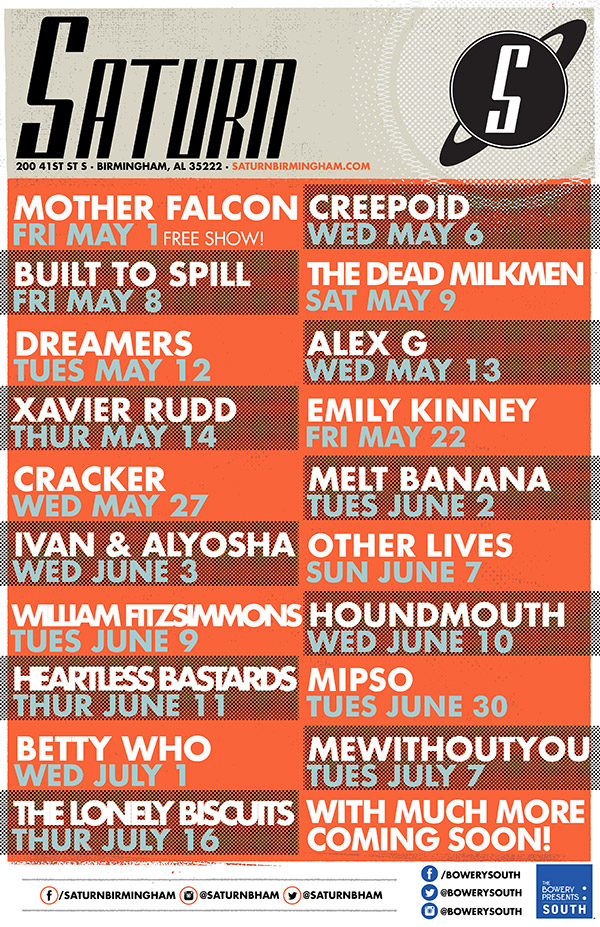 The initial lineup for the venue has also been announced, with nearly 20 shows coming this spring and summer to the Saturn, including Built to Spill, Houndmouth, The Dead Milkmen, and more kicking off the concert calendar. Tickets for all announced shows go on sale Friday at 10am at SaturnBirmingham.com.

“Birmingham has made amazing strides in the last decade and I feel very proud to be a small part of the tremendous momentum that is happening here” says Teasley. “It’s been great combining efforts with the Bowery for me. They truly create all encompassing, first-rate facilities for musicians and patrons alike. I’ve always had excellent experiences at their venues while touring with my own bands and my respect for their organization runs deep.”

Jim Glancy of the Bowery Presents says, “We are particularly excited about Saturn, the second we laid eyes on the venue space, we saw Brian’s vision and wanted to be part of it. Our goal when opening a new venue is taking care of people, both artists and consumer.”

Teasley relates, “For the last decade, from the inception of Bottletree (a legendary small music venue in Birmingham) my heart has been in giving back to the community of Birmingham for all the amazing punk rock I got to see here growing up.”

Teasley states, “Ultimately, what we are doing is a rather simple concept: we want to provide an immensely artist friendly space that is based on a punk rock ethos and combined with European communal ideas and then finally a whole lot of Southern hospitality thrown on top.”

Brian Teasley is an American musician and writer from Birmingham, Alabama. As a musician, Brian has played over 3,200 shows in 39 countries and 50 states with bands like Man or Astro-Man?, Shannon Wright, The Vue, The Polyphonic Spree, and St. Vincent. Teasley has toured with acts such as David Bowie, The Rolling Stones, Cheap Trick, and Brian Wilson. He has appeared on over 100 records and performed on various TV shows including David Letterman, Conan O’Brien, Jay Leno, Craig Kilborn, Austin City Limits, Jon Stewart, Alternative Nation, 120 Minutes and Jimmy Kimmel. As a writer he has written for CMJ, The NME, The Onion, Stomp and Stammer, and Creative Loafing. He was the head writer for the 90s music and comedy fanzine, Chunklet. Teasley has co-written two books: The Overrated Book and The Rock Bible. In the world of comedy and television Brian has written for the Cartoon Network and performed the music for Space Ghost Coast to Coast, The Jetsons, and other TV shows. He has also toured live with the Mr. Show Tour and The Comedians of Comedy. As a promoter, Brian has promoted over 900 shows in Birmingham and was the founder of the renowned punk rock club, Bottletree.

ABOUT THE BOWERY PRESENTS

The Bowery Presents is an independent promotion company based in New York City. With a core business based around great music, its mission is to bring the best bands to the best venues and to provide a great concert experience for fans and artists, along with reasonable ticket prices. Over the years, The Bowery Presents has worked with a vast cross-section of some of the most talented performing artists, including Willie Nelson, Aretha Franklin, LCD Soundsystem, Kings of Leon, My Morning Jacket, Passion Pit and Deadmau5. The company’s activities center on programming live music in the venues it owns and operates including several in New York —Terminal 5, The Bowery Ballroom, Mercury Lounge, and Music Hall of Williamsburg. The Bowery Presents also presents shows at such New York City venues as Madison Square Garden, Radio City Music Hall, Brooklyn Bowl and the Beacon Theatre, and across the Northeast, in venues like , the Capitol Theatre in Port Chester, NY and the Constellation Brands-Marvin Sands Performing Art Center, on the campus of Finger Lakes Community College in upstate New York. The company launched The Bowery Presents: Boston, an extension of the company headquartered in Boston to put on shows at Royale, The Sinclair and Great Scott and reopened The State Theatre in Portland, Maine—and recently acquired the Port City Music Hall there—in addition to opening Union Transfer and Boot & Saddle in Philadelphia. The company recently opened an Atlanta office, The Bowery Presents: South, which is responsible for putting on shows across the Southeast. Their reach includes exclusive national booking for the Civic Theatre and Gasa Gasa in New Orleans, and Saturn in Birmingham, as well as booking concerts in various venues in Atlanta, New Orleans, Birmingham, Nashville & more. For further information, go to www.bowerypresents.com/ 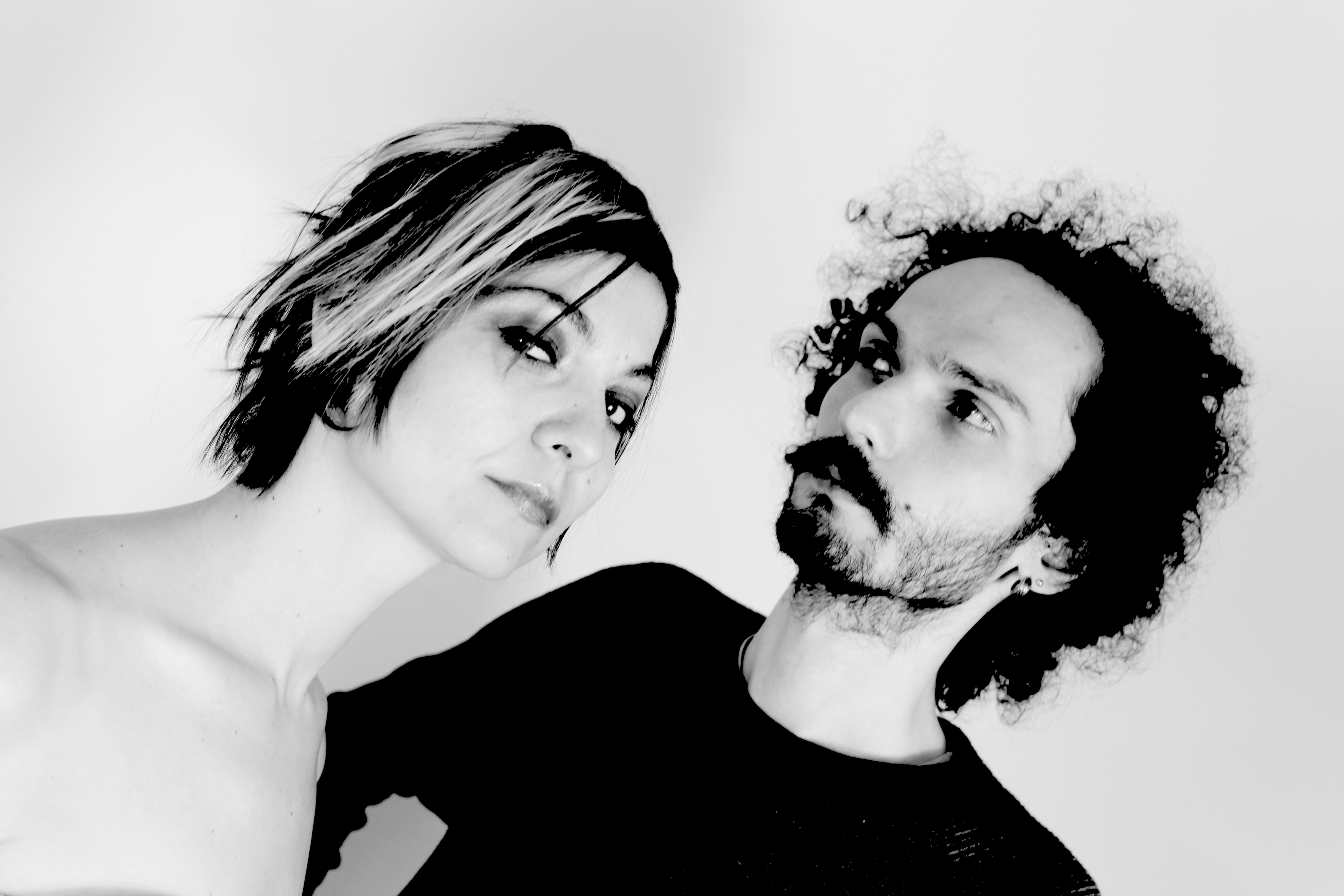 Istanbul’s Fuji Kureta share “Open Up,” in advance of Yetunde, due January 27th!

Love wine? Host a tasting in your home with WineShop